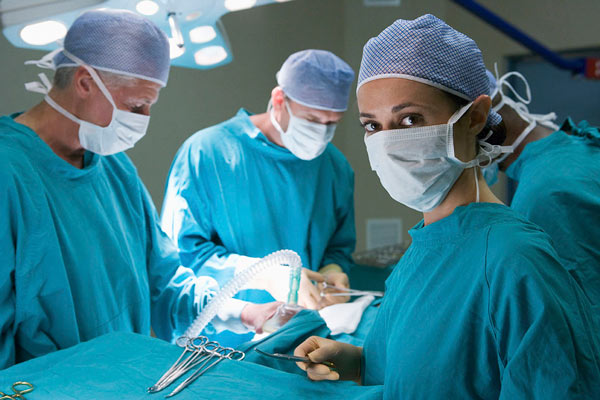 10 May Tumors, Bad Backs, and Cataracts: Interventional Physicians Face a Lifetime of Risk

Hollywood, FL—Under the Florida sunshine, the day after Super Bowl Sunday, interventional physicians attending a “depressing” session devoted to tumors, cataracts, and surgically-repaired backs likened the situation to the concussion problem currently plaguing athletes in the National Football League. According to one expert, many physicians might not want to know about the problem, but the hazards of the catheterization laboratory can no longer be ignored. In a town hall meeting at the 2016 International Symposium on Endovascular Therapy (ISET), physicians and researchers spoke about the importance of managing the occupational hazards linked with interventional cardiology, radiology, and endovascular surgery, among other fields, discussing everything from the lifetime risks of radiation exposure to the musculoskeletal injuries that slow working physicians at best and, at worst, force an early retirement.

“It was an extraordinarily depressing session,” said Gregg Stone, MD, of Columbia University Medical Center (New York, NY), who participated in the panel discussion. “We give up so much, and we’re so passionate about our specialty and our patients that we do these tremendous personal risks to ourselves and sometimes to our own staff. And I think that does have to change.”

Part of the problem, noted Stone, is that physicians begin their training when they’re young and seemingly indestructible. “You start this specialty as a 20-year-old, and we all feel immortal,” he said. “We’re strong, nothing is happening acutely. Radiation, musculoskeletal effects, cataracts, that’s something so far down the line, and it’s why people aren’t wearing radiation badges or taking this very seriously. It needs to be something that’s really taught early and emphasized in medical school, let alone cardiology training programs.”

William Gray, MD, Lankenau Heart Institute/Main Line Health (Wynnewood, PA), who spoke on the occupational risks of ionizing radiation in interventional procedures, said the issue is similar to the unmasking of lifetime risk that professional football players are exposed to with repetitive hits to the head. “This is a little bit like concussions in the NFL,” said Gray. “People didn’t want to talk about it, but now we’re talking about it. And the more we do, I think, the more relevant it’s going to be for people in their daily lives.”

One of the ISET course directors, Barry Katzen, MD, of the Miami Heart and Vascular Institute in Florida, said the purpose of the session was not meant to be depressing, but rather informative. As a physician who has undergone his “share of back and spine surgery,” Katzen said that if physicians are aware of the risks they’re exposed to throughout their careers, particularly radiation exposure, they can take corrective action. “It’s really more of a Hawthorne effect,” he said. “If you start paying attention to radiation management in your own lab, the reductions can be very dramatic.”

Learning About Radiation Effects From Chernobyl

Image-guided procedures are the leading source of radiation exposure, a problem compounded by the increasing number of interventions performed each year, as well as the by increasing complexity of those procedures, say the experts. Lindsay Machan, MD, of the University of British Columbia (Vancouver, BC), who also presented on the hazards of radiation exposure at ISET, told the audience that while there is “no safe dose” of radiation, individual genetic response to the hazards vary.

“You really don’t know how susceptible you are,” said Machan. “The brain and the eyes are much more radiation-sensitive than were previously thought, and more disturbingly, the person you relied on to tell you how much radiation is safe almost certainly doesn’t know.”

As a competitive squash player, Machan began to notice deterioration in his game after 15 years in clinical practice. “I went from being nationally ranked to where I couldn’t even win my club championship,” he said. He was diagnosed with a posterior cataract, and later suffered a retinal detachment as a complication from the cataract removal. He told the audience the lens of the eye is “just about the most, if not the most, radiation-sensitive tissue in the body” and posterior subcapsular cataracts are not age-related. These cataracts are typically caused by exposure to radiation.

Machan highlighted the research of the late Basil Worgul, PhD, from Columbia University, who studied radiation as a cause of cataracts in the thousands of workers who participated in the cleanup of the 1986 Chernobyl disaster. Even among individuals exposed to less radiation than the yearly allowable limit, the researchers documented the onset of cataracts and other relayed eye conditions, leading the group to conclude the threshold for radiation damage was likely much lower than previously believed.

In addition to the damaging effects of radiation on the eyes, there are concerns about head and neck tumors in interventionalists. In 2013, Ariel Roguin, MD, Rambam Medical Center (Haifa, Israel), published a report in the American Journal of Cardiologyhighlighting such concerns. They identified 23 interventional cardiologists, 2 electrophysiologists, and 6 interventional radiologists with brain and neck tumors. In 85% of cancers, the malignancy was documented on the physician’s left side. Although this doesn’t necessarily mean there is a cause-and-effect relationship, physicians typically stand anteriorly to the patient, with their left side closest to the patient’s chest and closest to the source of the radiation.

According to the Organization for Occupational Radiation Safety in Interventional Fluoroscopy (ORSIF), the interventional cardiologist’s head and neck are exposed to approximately 20-30 mSv of ionizing radiation each year. Various regulatory bodies recommend a dose limit of 20 mSv per year up to maximum of 50 mSv while the International Commission on Radiological Protection recommends a annual dose limit of 20 mSv for the lens of the eye, with no single year exceeding 50 mSv.

“Most of us assume we’re going to fall off our career path because of alcohol and apathy, but could this be happening because of our choice of career?” said Machan. “Well, it isn’t destined to happen. We’re not all going to go blind with shrunken testicles. There are things you can do about this.”

Among safeguards, education remains critical, he said. While radiation scatter is the primary cause of radiation exposure, scatter dose to the operator markedly increases in larger patients. In these bigger individuals, particularly those with a BMI exceeding 30, “we are getting blasted when we’re standing near those patients,” he said.

Wearing protection is important, and physicians should make use of ceiling-suspended or mounted shielding screens, if possible, in addition to wearing appropriate lead glasses, said Machan. He recommends minimizing the use of angulation, as this can increase radiation exposure to the operator, as well as to nursing staff and the anesthetist. Machan also recommends limiting the use of fluoroscopy time for observing objects in motion and lowering the intensity of fluoroscopy to the lowest dosages that yield adequate images. Using stored images and image magnification only when needed is also helpful in reducing exposure.

Finally, Machan recommends physicians “step away from the beam,” noting that radiation dissipates inversely as the distance from the source is squared. This means that tissue twice as far away from the radiation source receives 25% of the dose. Physicians, nurses, and technologists should leave the room if they don’t need to there, he said.

Stopping A Career In Its Tracks

While the focus on radiation is justifiably important given the concerns about cancer, Chet Rees, MD, of Baylor Scott and White (Dallas, TX), said musculoskeletal injuries can also “stop a career in its tracks.” The problem has been documented for some time, with a landmark survey from 1997 showing that while 6% of interventional cardiologists reported a herniated cervical disc, more than half had been previously treated for neck or back pain. Compared with other matched physicians, interventional cardiologists were more likely to miss work because of orthopedic injuries or to pull back on practice.

Based on the results of the survey, the term “interventionalist disk disease” was coined.

Rees said the data also show higher risks of cervical spondylosis—a form of degenerative osteoarthritis—in a large survey of interventional electrophysiologists, with older physicians and those in practice the longest more likely to develop the condition. Another survey, this one undertaken by the Society for Cardiovascular Angiography and Interventions, found that nearly 10% of operators reported taking a health-related leave of absence and one-third had taken an occupational health-related break. Approximately half of respondents reported orthopedic injuries. And finally, a Mayo Clinic survey similarly documented a high rate of work-related pain among techs, nurses, and physicians working in the cath lab.

While physicians should probably try to find comfort wherever they can, Rees stressed they shouldn’t make do with a lightweight vest. Despite claims from manufacturers about safety and protection offered by lighter vests, Rees said such statements don’t hold much water because regulatory standards for protective radiation garments are tremendously lax and inadequate. Lightweight vests have “poor and inconsistent protection, often counter to their labels,” he said. “A safe bet for interventionalists are non-lightweight, lead-based aprons.”

Two studies presented this week at ISET, including one by Rees, cast significant doubt on the protection provided by lightweight vests. Andrew Lichliter, MD, also of Baylor Scott and White Health (Dallas, TX), said that if physicians are worried about protection from radiation, lead is the best option. “And if it feels really lightweight, you’re probably not getting the protection that you think you are. It takes mass to block these X-rays,” he noted.